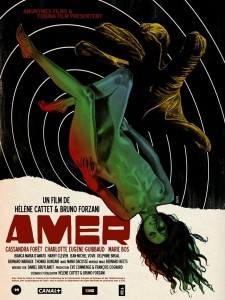 Blood. Flesh. Madness. Music. Mystery. A black glove holding a bloody knife. A stylish bella donna stripping nude for her killer. These are the familiar elements of the giallo, Italy’s own peculiar brand of bloody pulp fiction: a Mediterranean blend of detective stories, slasher flicks, and sexy ‘70s high-fashion shows that are beloved for their stylishness and sensuality. These films are overflowing with creatively conceived and executed violent set-pieces, killer soundtracks that fans still obsessively collect, and visual delights of all forms — men, women, clothes, cars, lamps, doorstops, everything is beautiful. So beautiful. To celebrate this most cinematic of horror genres, the Cinefamily presents ten rare screenings, including uncut 35mm prints of Dario Argento and Sergio Martino films flown in from Italy, and a sneak preview of the new French homage to the giallo, Amer!

Deep Red – 8:00pm
Dario Argento fans love arguing over whether this or Suspiria is his best film, but there’s a good case to be made that this isn’t just his finest achievement but also the best giallo ever made, period. David Hemmings (in one of his best roles) plays an English pianist who witnesses the brutal murder of his psychic neighbor and is drawn into a nightmarish web of clues involving grisly children’s drawings, a nasty Christmas double homicide from the past, a ghoulish lullaby, and a rising body count (including one standout scene swiped by John Carpenter for Halloween). Driven by Goblin’s ferocious and legendary rock score, this all-time classic features some of the scariest images Argento ever put on film (brace yourself for the dummy!) and works like gangbusters with an audience on the big screen; don’t even think of missing this one, proudly presented here in its 30-minutes-longer, richer uncut Italian version in a very rare 35mm screening.
Dir. Dario Argento, 1975, 35mm, 126 min.

Opera – 10:30pm
Largely considered to be his last truly great work, Dario Argento’s Opera possesses most of the stylistic hallmarks the mad Italian director is known for: crazy camera movements, unconventional scoring and song placement, tricked-out lighting and Hitchcock-on-PCP sequences of suspense and violence. The story is simply a reworking of “Phantom of The Opera” by way of the giallo, the genre Argento had undisputably mastered at this point in his career. His longtime musical colloborator Claudio « Goblin » Simonetti is back to do some scoring, this time with superstar producer Brian Eno in tow, which is a good thing considering how central the music is to the story. The film has some true standout moments of classic, hyper-creative Argento imagery, such as the scene in which a woman’s eyes are taped open with needles as she’s forced to watch the killer brutally stab someone to death. Does that sound like a good time to you? Then you need to get yourself to the theatre, ’cause this is one opera that won’t put you to sleep!
Dir. Dario Argento, 1987, 35mm.

Paranoia – 8:00pm
Also known as Orgasmo, this Italian-French co-production written and directed by Umberto Lenzi is one of the sexiest, yet most undervalued gialli of its time. Don’t go in expecting a double-digit body count or an unseen killer wearing shiny leather gloves; Paranoia is a perverse game of cat-and-mouse played by wealthy widow Carroll Baker (throwing herself into the role with naked abandon) and dubious houseguests Lou Castel and Colette Descombes. Rated X in the U.S. for Baker’s copious nude scenes, this mindbending drive-the-widow-crazy caper is capped by a deliciously cynical sting-in-the-tail that is molto-Lenzi.
Dir. Umberto Lenzi, 1969, 35mm, 91 min.

Eyeball – 9:45pm
With its abundance of empty-headed victims and suspects, thumping, cheeky Bruno Nicolai score, and trendy lesbi-antics, Eyeball is a tasty slice of giallo provolone for any fan of cheese, Italian style. Playing like an insane mash-up of Ten Little Indians and If It’s Tuesday, This Must be Belgium, this Italian-Spanish co-production follows a progressively shrinking busload of tourists through sunny Barcelona as a red-gloved killer with a penchant for eyeball-plucking takes their lives and their left eyes. On its own terms, this ludicrously slash-happy outing makes for energetic and eye-popping viewing, a poorly dubbed treat for fans of Eurotrash at its trashiest.
Dir. Umberto Lenzi, 1975, 35mm, 91 min.

Dirty Pictures – 11:30pm
Leave it to Italian genre king Umberto Lenzi to find the worm in the big juicy apple of ‘70s free love and permissiveness. Supposedly Lenzi didn’t really want to make this one a giallo (and this film certainly stretches the definition to its limits), but rather a countercultural film along the lines of Easy Rider — legend has it that producer Carlo Ponti strong-armed him into completing the “trilogy” that also included the 1967 film Paranoia, and the 1969 film Orgasmo (which later was retitled Paranoia in the States, and is the Paranoia we’re showing earlier in the evening). The results are great, however you slice it. Like all the best Lenzi films, Dirty Pictures is full-blooded in both its sleaze and cinematic invention. With cinematographer Alfio Contini (The Night Porter) behind the camera, Lenzi downplays explicit sexuality in favor of gialloesque stalkery, and stars Irene Papas and the smokin’ Ornella Muti keep things steamy. As with Paranoia, Dirty Pictures saves the best for last, sucker-punching the audience with a deliciously pessimistic coup de grace.
Dir. Umberto Lenzi, 1971, 35mm, 90 min.

Amer
(Sneak Preview!)
shown with
Perfume Of The Lady In Black
and
What Have You Done To Solange?

Amer – 8:00pm
The giallo has its own particular way of being obsessed with the surface and substance of the female body: satiny skin torn and sliced, innards plumbed deep with shards of windows and falling knives, wind at every turn to whip hair into eyes — everything from the outside world seems to want in, in, in. In Amer, Hélène Cattet and Bruno Forzani’s avant-garde smash-and-grab appropriation of the genre’s conventions, we finally get inside that giallo heroine’s head. In a defiantly dreamlike atypical structure, this eye-poppingly lurid tale (shot on super-saturated 35mm slide film) follows the same character’s psychosexual, psychedelic awakening and decline as a traumatized child, burgeoning adolescent, and wanton adult. All in all, hang onto your Freud, because this is one exploration of the male gaze, the female body, and the erotic (and horrific) terrain in between that no self-respecting art- or genre-lover should miss.
Dirs. Hélène Cattet & Bruno Forzani, 2009, 90 min.

Perfume of the Lady In Black – 9:45pm
Is it a giallo or is it a Polanski-esque psychological creeper? Perfume of the Lady In Black is both. Prepare for a trip into the fraught mind of “Silvia” (scream queen Mimsy Farmer in her greatest role), a work-obsessed young woman haunted by visions of the eponymous woman in black and a ghostly young girl in white — but shot with a hot yellow color scheme and bursting into stylish, grisly episodes with enough regularity to satisfy even the most sated giallista. Is Silvia being gaslighted by her boyfriend and weird neighbours? Why do they hang out with a strange witch doctor? Or is she slipping into murderous dementia all by herself? A real bizarre one-off by the obscure but first-rate Francesco Barilli, it’s an eerie mystery/horror hybrid, with a genuine kickass shocker of an ending — one of the great undiscovered treasures of Italian cinema, it remains sadly unavailable in the U.S. in any format (look for Cult Epics’ upcoming DVD release!) An unmissable high point of Italian delirium.
Dir. Francesco Barilli, 1974, 101 min.

What Have You Done To Solange? – 11:45pm
Schoolgirls gone bad, a knife-wielding killer, and nasty secrets involving an illegal abortion are just a few of the shocks awaiting you in this note-perfect example of the giallo, one which went unrecognized for decades in America but is now recognized as one of the genre’s essential classics. Philandering schoolteacher Fabio Testi becomes entangled with a malicious killer when his student girlfriend spies on a murder in the woods, and when he can’t provide an alibi, he soon becomes the main suspect as more bodies begin to pile up. Ennio Morricone’s dreamy musical accompaniment and sterling ‘scope photography by future trash-film god Joe D’Amato make this several cuts above your average thriller, plus you get a surprise third-act appearance by Camille Keaton, the abused star of I Spit on Your Grave! Don’t miss the chance to catch this sleazy masterpiece, but be prepared to take a long, hot shower when you get home.
Dir. Massimo Dallamano, 1972, 35mm, 103 min.

Sergio Martino Double Feature:
All The Colors Of The Dark (Uncut!)
shown with
The Strange Vice Of Mrs. Wardh

All The Colors of the Dark – 8:00pm
One of the wildest, trippiest thrillers to come out of Italy, this nightmarish mixture of Rosemary’s Babyand Blood and Black Lace was the second hit teaming of director Sergio Martino and his voluptuous leading lady Edwige Fenech. Here she plays a London wife recovering from a car crash and miscarriage whose best friend decides to help her out by — uh, initiating her into a Satanic cult where she’s forced to drink fox blood and participate in an orgy. Then there’s her suspicious husband, her even more suspicious sexy female neighbor, and recurring visions of her mother’s stabbing death. Bruno Nicolai’s incredible sitar-laced score and a staggering experimental opening nightmare sequence are just the icing on this very decadent cake (shown very heavily cut in the U.S. as They’re Coming to Get You), proudly presented in an extremely rare uncut 35mm presentation you’ll probably never see in L.A. again! DJ Mahssa (of Dublab) will be here to spin tunes before and in-between the films!
Dir. Sergio Martino, 1972, 35mm, 94 min.

The Strange Vice of Mrs. Wardh – 9:45pm
Stunning Euro screen goddess Edwige Fenech shot a huge dose of sexual adrenaline into the Italian thriller craze with this landmark mixture of horror and twisty mystery, courtesy of stylish director Sergio Martino. Here, she plays the dissatisfied wife of a diplomat who’s still haunted by visions of a perverse relationship with her knife-wielding ex — one who used to play weird rape games during rainstorms and is now popping up to send her roses and menacing death threats. Will Fenech go mad from all these disturbing dreams? Or is someone trying to drive her mad? Featuring a gorgeous soundtrack by Nora Orlandi, some amazing scenes like a party where girls rip off each other’s paper clothes, and a plot twistier than a drunken conga line, this essential slice of ‘70s Italian pop culture, also known as Blade of the Ripper, is making a very rare 35mm appearance back on the big screen where it belongs.
Dir. Sergio Martino, 1971, 35mm.